Religious illiteracy is one of America's most pressing civic problems, according to Stephen Prothero, author of Religious Literacy: What Every American Needs to Know -- and Doesn't.

He'll speak about that at 7 p.m. 14 November as part of the Distinguished Speakers Series/Indiana Historical Society History Makers. Tickets are $25; call 317:232-1882.

His presentation is part of the "Spirit & Place" Festival and takes place in the Basile Theater at the Indiana History Center, 450 West Ohio Street, Indianapolis.

A discussion of Prothero's book is set for 6:30 p.m. 10 November in Christian Theological Seminary, 1000 West 42d Street, Indianapolis. Led by Scott Seay, assistant professor of the history of global Christianity, it's free. To sign up, call 317:924-1331.
Posted by Indianapolis Observer at 10:24 AM No comments:

Nearly 345 people from around the world have applied for The Mind Trust of Indianapolis' Education Entrepreneur Fellowship, reports Inside INdiana Business.

Those selected will attempt to take their ideas about public education and transform them into realities in underserved communities. The Mind Trust will provide two years of salary ($90,000/year), benefits and customized training so fellows have the support necessary to develop, build and launch their initiatives.
Posted by Indianapolis Observer at 3:14 PM No comments:

The 21st Annual Hoosier Storytelling Festival will be held 8-11 October in adjacent locations in downtown Indianapolis: Military Park and the Indiana History Center.

Presented by Storytelling Arts of Indiana, it includes these featured storytellers (and more):

Charlotte Blake Alston is a storyteller whose interest in literature, the oral tradition and the arts began in childhood when her father read to her the work of writers and poets. Charlotte breathes life into traditional and contemporary stories from the African and African American oral and cultural traditions.

Beth Horner is noted as a vivacious talent whose performances captivate audiences with a wide variety of folk, literary, traditional, contemporary and original tales from around the world. (That's her photo; credit Ron Gurule.)

Kevin Kling, best known for his popular commentaries on National Public Radio’s All Things Considered delivers hilarious, autobiographical tales that are as tender as they are true to life: hopping freight trains, getting hit by lightning, growing up in Minnesota, and eating things before knowing what they are.

Gene Tagaban is a captivating performer of combined Cherokee, Tlingit and Filipino ancestry. He began dancing at the age of five and grew up listening to and learning the songs, dances and stories of Alaska's Tlingit people.

To buy tickets, click here.
Posted by Indianapolis Observer at 4:18 PM No comments:

Between 10 a.m. and noon, volunteers from these three groups plus Indy Parks & Recreation and local residents will help mulch the median near Dr. Martin Luther King Drive and 10th Street in Indianapolis to celebrate Environmental Good Turn Day. Time will also be spent cleaning up the area to improve the overall appearance of the Ransom Place Neighborhood.

Indy's No Longer Number One

Forbes estimates the monthly median cost of buying and maintaining a home in Indianapolis at $1,232 a month.
Posted by Indianapolis Observer at 7:57 PM No comments:

End of an Era 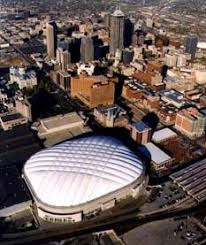 If you care, meet on the North steps of Lucas Oil Stadium for a press conference organized by the Indianapolis Convention & Visitors Association.

Various persons who have been associated with the Dome over the years will share memories as the roof slowly descends. The deflation, which is expected to last 30 to 45 minutes, will consist of turning off the large fans creating pressure that keeps the roof inflated.
Posted by Indianapolis Observer at 7:51 PM No comments:

Mayor Greg Ballard spotlights Indy's diversity in a poster at the Indianapolis International Airport.
Posted by Indianapolis Observer at 4:38 PM No comments:

Columbus philanthropist J. Irwin Miller’s family is poised to donate his majestic home (pictured) to the Indianapolis Museum of Art, provided it can raise millions of dollars to maintain the sprawling Bartholomew County property, reports Scott Olsen in the Indianapolis Business Journal.

IMA board members have given CEO Maxwell Anderson the go-ahead to seek funding for an endowment to care for the home, Olsen notes, adding that landing the architectural gem would be a major coup for the museum. Architect Eero Saarinen, whose works include the Gateway Arch in St. Louis and Dulles International Airport in Washington, D.C, designed the house in 1957.
Posted by Indianapolis Observer at 3:03 PM No comments:

Project Open Market is an Indianapolis initiative to spur investment and create economic opportunity on the Near-Eastside by removing the Market Street I-65/70 interstate ramp and building a new interchange along East Washington Street.

The project, financed mostly through federal grant dollars, will open up Market Street for new business opportunities and create a more pedestrian-friendly corridor that will better connect the Near-Eastside to downtown Indianapolis.

Indy's International Airport Gets Its Art

Artwork to be displayed at the new Indianapolis Airport terminal will be installed during a ceremony Wednesday, reports Inside INdiana Business.

Four of the artists will attend the event. The artworks include a kinetic sculpture in the parking garage atrium, a suspended sculpture in Civic Plaza, a mural in the North Security screening area and a painting above the grand escalator.
Posted by Indianapolis Observer at 10:16 PM No comments:

Come to the Indianapolis Museum of Art at 6:30 p.m. 25 September for an Artist Talk & Exhibition Opening Party of "Class Pictures: Photographs by Dawoud Bey".

The exhibition includes 40 photographic portraits of high school students paired with their own written words. For the exhibition, Bey photographed young people from all parts of the economic, racial and ethnic spectrum in both public and private high schools across the country. The statements displayed alongside the portraits are touching, funny or harrowing, deepening our appreciation for young adults facing the challenges of the 21st century.

The artist will discuss his work with IMA Senior Curator of Contemporary Art, Lisa Freiman at 6:30 p.m. Then, from 8-10 p.m. comes the opening party.

Another mansion (pictured) once owned by a Conseco Inc. executive will serve as the next year’s Decorators’ Show House, reports the Indianapolis Business Journal. The opening night party will be 29 April 2009.

Donald and Patricia Gongaware’s French-style estate in Westfield will get an interior makeover from designers as part of the annual fund raiser staged by St. Margaret’s Hospital Guild.

The Gongawares surrendered their 59-acre estate to Conseco to settle a legal battle over loans Donald Gongaware borrowed to buy Conseco stock but never repaid. Gongaware was chief operations officer of the Carmel-based insurance company in the 1990s.

Conseco sold the house in 2005 to a company that plans to build custom homes surrounding the Gongaware’s mansion.

The house is sprawling, according to details provided by the guild. It encompasses 18,695 square feet, boasting 19 rooms and 15 baths. It also has a seven-car carpeted garage and five formal gardens. Preview (pre-decoration) tours are 11 a.m. to 5 p.m. 7 and 8 February 2009.

Since 1907, the guild has contributed the funds it raises to Wishard Health Services, the county-owned hospital near downtown Indianapolis.
Posted by Indianapolis Observer at 2:22 PM No comments:

United Way of Central Indiana leaders announced Friday that they will attempt to raise a record $40 million in this year’s campaign, reports Indianapolis Business Journal.

The target is nearly $1 million more than contributors gave in 2007 to help the 100-plus agencies in United Way’s six-county region.
Posted by Indianapolis Observer at 11:22 PM No comments:

Dr. Sherman is a senior fellow at Sagamore Institute for Policy Research.

After Dr. Sherman's presentation, there will be a discussion by those who have implemented this initiative.

Tavern at the Temple Shuts Down

Tavern at the Temple restaurant at 11th Street and the Central Canal in Buggs Temple closed for good yesterday, reports Cory Schouten of Indianapolis Business Journal.

Creation Cafe, a casual restaurant and coffee shop on the first floor of the building just north of downtown Indy, will remain open and the historic building will continue to host special events until a replacement tenant is found, he says
Posted by Indianapolis Observer at 2:31 PM No comments:

In 1909 the first race at the Indianapolis Motor Speedway was a motorcycle race. This month, the Speedway is going back to its roots and hosting the inaugural running of The Red Bull Indianapolis GP on Sunday (14 September).

MotoGP is the most technologically advanced series on two wheels. The series races on four different continents and is the oldest motorsports world championship. With top speeds of more than 200 mph, the 220 horsepower motorcycles will race on a 16-turn road circuit.

Learn how to make the home environment safer and healthier at a workshop developed by the American Lung Association.

This program, from 1-4:30 p.m. 13 September at the Indianapolis Peace House, 1421 Central Avenue, Indianapolis, will teach volunteers how to assess homes and make recommendations that are of low or no cost to the resident.

The Master Home Environmentalist Program addresses issues of indoor pollution that can damage health and the environment, including pesticides, allergens, molds, tobacco smoke, lead, and home chemicals. The overall mission is to promote health by reducing pollutants in the home through volunteer-based education and action.
Posted by Indianapolis Observer at 7:41 PM No comments:

Daniel Pink is the author of several provocative books on the changing world of work. Pink’s best known work, A Whole New Mind: Why Right-Brainers Will Rule the Future, has been translated into 16 languages.

In this book, Pink offers a fresh look at what it takes to excel. He claims the era of "left brain" dominance, and the Information Age that it engendered, are giving way to a new world in which "right brain" qualities—inventiveness, empathy, meaning—predominate.

Fortunately for us, he'll be in Indy 29 October to speak at Clowes Memorial Hall on the campus of Butler University -- and, you can get two free tickets to his 7:30 p.m. speech.
Posted by Indianapolis Observer at 7:15 PM No comments:

The Indianapolis Colts have donated $1 million to the Riley Children's Foundation, reports Inside INdiana Business. The money will be used for a range of projects and activities to assist children throughout the state.

One of those efforts will be the Colts' support of Kids Caring & Sharing. Riley's Hope Happens Here: The Campaign for Indiana's Children is trying to reach its $175 million goal.
Posted by Indianapolis Observer at 11:38 PM No comments:

The Indianapolis Indians report attendance at Victory Field reached 606,166 in 2008. It's the best regular season attendance mark since 2000.
Posted by Indianapolis Observer at 10:21 PM No comments:

In 1927 a group of influential Indianapolis citizens formed an organization called the Gamboliers in an effort to introduce more contemporary art to the Indiana art scene.

Each member paid an annual fee of $25, and purchases were made by Mary Quinn Sullivan, an Indianapolis native who resided in New York City and traveled frequently to Europe.

During the five years of the Gamboliers' existence, more than 150 works on paper by European and American artists were purchased and entered the museum’s collection.

Approximately 35 works on paper, including works by Modigliani, Matisse, Picasso and Maillol, will be featured in an exhibition of their purchases, open in the Golden Gallery at the IMA through 8 June 2009.
Posted by Indianapolis Observer at 10:16 PM No comments:

The Saints Have Marched In

The National Football League's New Orleans Saints have left the Gulf Coast due to Hurricane Gustav.

The team plans to spend most of the week working out at Lucas Oil Stadium, returning to New Orleans on Friday in advance of its season opener on 7 September.
Posted by Indianapolis Observer at 9:17 PM No comments: