The headline at the Daily Beast this afternoon says it all: "Indiana Guv Kills Propaganda Outlet."

No more plans to provide content for local media. Now, if only local media would up their game....

Posted by Indianapolis Observer at 5:32 PM No comments:

It surprised this Indianapolis Observer how quickly Gov. Pence walked back his decision to set up a government owned and operated news source, JustIN, as content supplier for Hoosier media. The ridicule from commentators across the country continues to roll in, however.

It's really sad that the poor excuses for journalists we have left in the state no longer perform their watchdog function. (Can anyone imagine what Harrison Ullman would have done with this ham-handed attempt to manage the news?)

One uncharitable thought: Pence leaked the JustIN trial balloon as cover for his backtrack on expanding Medicaid for low-income Hoosiers. He wanted to redirect conservative Republican gaze from his healthcare coverage decision.

Nothing to see here. Move along, folks.

The Atlantic has now weighed in on Pence's new propaganda machine:

"Should politicians be in the news business? Sure, Pence needs to be able to communicate what the state is doing, but communication and reporting are different matters. It's unclear what the cost of the project will be to taxpayers, though the Star says the combined salaries of its employees will be about $100,000. More importantly, it's an obvious threat to the notion of a free press. State-sponsored journalism is generally the province of authoritarian states—think Pravda or Xinhua. If the government is pushing out information with newspaper-style coverage that looks like the standard press but is actually government ventriloquism, will readers be able to tell the difference?" writes David A. Graham.

"There's every reason to believe that government propaganda presented under the guise of reporting could fool readers just as easily [as hoaxes on the internet]. It would be even more pernicious if Indiana press outlets opted to run pre-written news stories alongside standard reportage, giving the state a chance to co-opt the free press' authority."

Update:
And, from The Daily Beast:
"Q: When does the conservative governor of a majority-Republican state start to resemble an old-line Communist apparatchik?
A: When he uses taxpayer money to fund government-approved “journalism” to compete with privately-owned, independent news outlets."

Posted by Indianapolis Observer at 2:48 PM No comments:

This Indianapolis Observer is speechless at the report that Gov. Mike Pence is using taxpayer dollars to fund a state office to write and distribute "news releases" -- "a state-run news organization that will offer pre-written articles to smaller news outlets, as well as break stories about his administration."

How can this be considered ethical behavior by a governor? How is this different from writing, printing and distributing campaign materials on state time?

Will they be labeled as "advertorials", for they fit the definition. We the People are paying to promote Pence's presidential bid (or, at the very least, his re-election campaign).

Comments came quickly, including this pointed jab: "the notion of elected officials presenting material that will inevitably have a pro-administration point of view is antithetical to the idea of an independent press."

What legitimate news organization would publish such obviously slanted "news"? Oh, wait. I forgot about Gannett.

Posted by Indianapolis Observer at 8:00 AM 2 comments:

"The Indianapolis City-County Council doesn't have money to fix potholes that line city streets in your neighborhoods, build and replace broken sidewalks and install street lights or perform any number of other basic city services, but it has money in its pockets to burn on...Angie's List."

This Indianapolis Observer never ceases to be amazed at the ability of Indy residents to focus on the inessential (deflategate comes to mind) while the essential languishes.

Posted by Indianapolis Observer at 12:15 PM No comments:

The Indianapolis Department of Public Works would like to remind residents that in observance of Martin Luther King Jr. Day there will be no regular trash or heavy trash pick-up Monday (19 January). All trash collection services will operate one day behind on a slide schedule. This means trash routes will be collected as follows:

All trash collection services will return to normal 26 January.

That is, unless something changes....

Who knows when we'll have trash pickup -- or what'll be picked up in "double collection" (if that ever happens).

This Indianapolis Observer thinks that the trash pickup folks are the same ones who are responsible for snow removal (which also hasn't happened in this part of Indy). (Yes, that was a bit of snark.)

UPDATE: Oh -- and, next week is the holiday-induced "trash slide". Yep. No Monday pickup on 19 January, so everybody's pickup is pushed back a day.

Except this Indianapolis Observer's trash from LAST Wednesday (14 January) has yet to be picked up. It's been sitting at the curb since Tuesday night (13 January).

UPDATE 2: This Indianapolis Observer's trash was picked up about 6 p.m. Friday (16 January). Whew!

Posted by Indianapolis Observer at 4:24 PM No comments:

Still No Trash Collection in Indy

Posted by Indianapolis Observer at 6:44 PM No comments: 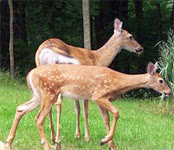 Slate.com has an interesting commentary on deer/car road collisions.

"We now have about 30 million deer in the United States—100 times more than a century ago. Having all those deer has consequences—for us, the landscape, and the deer themselves."

Your Indianapolis Observer has had a collision with a deer near Eagle Creek Park. Which brings up a question: how many deer died during the recent cull? Probably not nearly enough.

Posted by Indianapolis Observer at 3:16 PM No comments: