Not only did former Gov. Mitch Daniels try to deep six use of a history text he didn't like, turns out his education boss rigged school ratings so a prominent GOP contributor's charter schools wouldn't be C-listed.

No wonder Gov. Pence and his henchmen are working so hard to marginalize Glenda Ritz. It was her election that caused both scandals to be uncovered.

This Indianapolis Observer is sure that there'll be more to come on these, and others.

Posted by Indianapolis Observer at 8:25 AM No comments:

Check Out Indy Island This summer 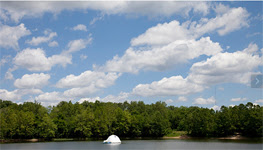 Commissioned by the IMA in 2010, Indy Island is a fully habitable experimental living structure that examines the daily needs of contemporary human beings, and explores the tensions between autonomy, independence and individualism. Simaitis's project Island Fever will allow park visitors to communicate with the island through an on-shore radio that will transmit signal to the Zittel structure by way of two smaller, floating satellite islands. The smaller, outlying islands will be equipped with an audio system designed to create vibrations and ripples in the water so visitors hear and see their messages travel across the lake to Indy Island. Simaitis will prompt visitors to reflect on cosmic relationships and diplomacy at an onshore phone booth, and to transmit their messages through the radio system in order to initiate contact.

During Simaitis's residency, Indy Island will be outfitted with a HAM radio station, a radio-telescope constructed from a beach umbrella and an empty pineapple can, a variety of antennas, and a radio spectrograph. He will use the spectrograph to capture images of the transmissions that will be shared on the Indy Island blog, www.imamuseum.org/island2013. At scheduled times Simaitis will invite visitors to the island in order to transmit their messages into outer space, listen for signals from extraterrestrials, and to try and communicate with amateur radio operators around the world and satellites orbiting Earth, such as the International Space Station.

“The term 'island fever' was traditionally used to describe the sensation of isolation and restlessness often felt by the inhabitants of island nations; but now, as islands have become destinations of escape for tourists, the term 'island fever' has taken on a new, contrasting meaning,” Simaitis said. “My residency on Indy Island is meant to explore this mixed feeling by providing a sense of isolation on an island well-equipped with its own means of escape. My intention for this project is not only to escape the island, but to reach out a bit further and enable visitors to do so as well.”

Island Fever is the fourth residency in Indy Island at the Art & Nature Park. The six-week residency allows an artist to enliven the park through the experimental living structure anchored in the Park’s lake. The resident is chosen through an open call for proposals conducted by the IMA. Students and emerging professionals in the fields of art, design and architecture are encouraged to apply. Simaitis was chosen from a pool of more than 150 applicants from around the world.

Rimas K. Simaitis (b. 1983) lives and works in Los Angeles, California. His areas of research have included islands, space and relations between geography and culture. He developed an interest in radio transmissions when learning how Reggae music formed on the island of Jamaica. Due to the proximity of Miami and New Orleans to Jamaica, the island could receive the distinct music being broadcast from these cities. As a newly independent nation in the ‘50s and ‘60s, Jamaican islanders sought to form a new identity through music. Influenced by the radio broadcasts, they first developed an upbeat Ska style, but the hot weather eventually slowed down the tempo so the islanders could dance more comfortably—ultimately creating Reggae.

Simaitis’s work has been included in exhibitions at the Museum of Contemporary Art Santa Barbara; the New Wight Gallery, University of California, Los Angeles; the Roots & Culture Contemporary Arts Center in Chicago; SOIL in Seattle; and the Boise Art Museum. Simaitis holds an MFA from University of California, Santa Barbara, and two BAs from Seattle University. More information about his work is available on his website.

The Associated Press has a fascinating look at former Gov. Mitch Daniels' efforts to interfere with what's taught by university professors -- while he was still governor of Indiana.

It's all the more interesting as he's now the head of Purdue University.

Here's some of what it says:
"Emails obtained by The Associated Press through a Freedom of Information Act request show Daniels requested that historian and anti-war activist Howard Zinn's writings be banned from classrooms and asked for a "cleanup" of college courses. In another exchange, the Republican talks about cutting funding for a program run by a local university professor who was one of his sharpest critics."

and
"Ken Paulson, president of the First Amendment Center, said it's not unusual for governors or mayors to denounce art, music or popular culture. But he said he couldn't find any other examples of governors trying to censor political opponents. 'What sets this apart is what appears to be a back-channel effort by the governor to limit access to ideas,' said Paulson, also dean of the College of Mass Communication at Middle Tennessee State University. 'Under the First Amendment, the government is prohibited from trying to suppress expression with which it disagrees.'"

and
"In a separate round of emails in April 2009, Daniels called for an audit and possible funding cut for a program run by Charles Little, executive director of the Indiana Urban Schools Association and a professor at Indiana University-Purdue University Indianapolis. Little had been highly critical of Daniels' education overhaul in internal emails and he often critiqued the governor's performance at public meetings."

and
"'It is astonishing and shocking that such a person is now the head of a major research university, making decisions about the curriculum, that one painfully suspects embodies the same ignorance and racism these comments embody,' said Cary Nelson, an English professor at the University of Illinois who served six years as president of the American Association of University Professors."

and, finally
"Purdue University Board of Trustees Chairman Keith Krach, who hired Daniels last year, did not return an email seeking comment. Trustees are scheduled to receive a six-month assessment from Daniels this week."

Well, this Indianapolis Observer isn't surprised and muses that Purdue will suffer both academically and intellectually by choosing such an unworthy successor to France Córdova.

UPDATE:
Great followup to the story by the IBJ's Lou Harry: Zinn and the art of historical revisionism
(And, major props for the terrific headline!)

UPDATE 2:
Read what Sheila Kennedy has to say on the topic here: The Saga Continues.
Among her comments: " The Governor was NOT within his rights to dictate what can and cannot be taught in public school or university classrooms, and certainly not within his rights to try to cut off funding for a respected academic program because the scholar in charge of that program had been critical of his education policies."

Posted by Indianapolis Observer at 10:33 PM No comments: 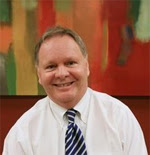 That's the headline in yet another article in today's Indianapolis Star about Indiana government corruption.

Kudos to reporter Alex Campbell for explaining how yet another GOP contributor -- Howard Bates (pictured, at left) -- is profiteering on the taxpayer's dime with the agreement of the political powers that be.

For shame, Gov. Pence -- and all the Republican legislators and staffers who condone such blatant misuse of tax revenue to line the pockets of the fat cats. 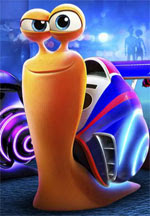 It's always nice to see Indy showcased in the movies, even when the star of the flick is an animated snail.

Yes, Turbo -- a somewhat sluggish garden snail with racing dreams -- is the protagonist of a new fantasy film from DreamWorks Animation SKG.

One of the setting is the Indianapolis Motor Speedway, and your Indianapolis Observer can't wait to see it from a snail's eye view.

An Evening With Jose Antonio Vargas.

Jose Antonio Vargas (pictured), one of the leading voices in the U.S. immigration will engage in a community conversation on one of the most challenging issues facing our country and our city.

Vargas, an award-winning journalist and founder of Define American, comes to the Arch at Chatham, 617 East North Street, Indianapolis (map), at 6 p.m. 17 July.

Tickets for the evening are $50, and include the hors d'oeuvres and wine reception.

All of the proceeds from the evening will be donated to the Immigrant Welcome Center, courtesy of the Morales Group, Arch at Chatham and Buca di Beppo.