No, It's Not Because of Sandy

All Indianapolis Public Library locations will be closed November 12, 2012. for the annual Library Staff In-Service Day.

Join the conversation at the Indiana History Center, 450 West Ohio Street, Indianapolis, for the second of three public forums on health care.

"Healthcare Disparity and Access" is the topic for the 1 November session, moderated by Barbara Lewis, host of WFYI's Sound Medicine.

It begins with a 6:30 p.m. reception, followed by the panel conversation beginning at 7 p.m.

Mourdock: God Plans Everything That Happens

"There are plenty of reasons that a sensible Hoosier would not want to have Mourdock as a senator. He’s a Tea Party favorite who toppled the longtime incumbent, Senator Richard Lugar, in a primary, during which he said that his definition of bipartisanship was 'Democrats coming to the Republican point of view.'” As state treasurer, he sued to stop the Obama administration’s rescue of Chrysler, a company that is directly or indirectly responsible for about 100,000 jobs in Indiana.

"But let’s just talk today about his comment on abortion. Mourdock was basically saying that everything that happens is part of God’s plan. Did that mean God’s plan included evil things like sexual assault? Or just pregnancies as a result of sexual assault? Theologians have been arguing these kinds of questions for more than a thousand years. I don’t think we can expect to work them out in the Indiana Senate debate."

Posted by Indianapolis Observer at 12:05 PM No comments:

The Headless Horseman Rides Through Sunday 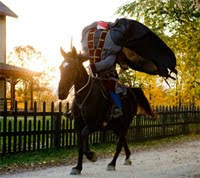 The Headless Horseman has extended his stay at Conner Prairie Interactive History Park in Fishers (map). Instead of riding off on Saturday (27 October), he'll make more appearances on Sunday (28 October).

Gates will be open from 6 p.m. to 9 p.m. Thursday through Sunday (25-28 October). Nightly thrills include a haunted hayride, pumpkin bowling, The Legend of Sleepy Hollow marionette show, catapulting pumpkins, scary-o-ke singing, nightly showings of Disney’s “The Legend of Sleepy Hollow” film and a carnival games midway.
Posted by Indianapolis Observer at 10:00 AM No comments:

Mourdock Has Jumped the Shark

Look hard in the mirror, all of you who voted for Mourdock in the Indiana Republican primary.

You decided to replace a true statesman -- Richard G. Lugar -- with this Tea Party buffoon!

This Indianapolis Observer is appalled.

Surely there will be more in other news outlets, but you can read Michael McAuliff's coverage here: "Richard Mourdock On Abortion"

UPDATE
Thomas L. Friedman wrote this in the New York Times:
"Too many Republicans, particularly moderate business types, don’t want to admit how much their party has been led around of late, not by traditional conservatives, but by a radical Tea Party base that has driven decent, smart conservatives — like Bob Bennett of Utah, Bob Inglis of South Carolina, Richard Lugar of Indiana and Olympia Snowe of Maine — out of office."

How can the Indiana GOP sleep at night?

UPDATE 2
Richard Mourdock, misogynist: "The latest entrant into the Republican rape insensitivity bake-off is Indiana Senate candidate Richard Mourdock, who said tonight that 'even when life begins in that horrible situation of rape, that it is something that God intended to happen'."

UPDATE 3
"Rape Pregnancies: Just Another Part of God's Plan": "Mourdock was so busy worrying about articulating why he wants to take away women's rights after they are raped that he neglected to remember that rapists are both criminals in the eyes of the law, and sinners in the eyes of his God."

Posted by Indianapolis Observer at 10:52 PM No comments:

So, Offloading Peyton Was a Good Idea, How?

Move Along, Folks; Nothing to See Here

"There are new concerns that the city's homeless could be costing Indianapolis big money and business," according to Fox 59.

And a tip of the hat to Advance Indiana for calling attention to the issue: "Ballard Worries About Homeless Blight On Downtown But Not Growing Crime Problem".

This Indianapolis Observer sez, add the "panhandling problem" to Indy's high visitor tax and it's a wonder anyone books a meeting or convention in the Circle City!

Posted by Indianapolis Observer at 10:34 AM No comments: