A former columnist for The Indianapolis Star who was dismissed from her job is suing the newspaper for age discrimination, reports IBJ.com.

Susan J. Guyett filed her lawsuit in a federal court in Indianapolis 26 April after the Equal Employment Opportunity Commission gave its support for her to sue.
Posted by Indianapolis Observer at 4:54 PM No comments:

"The Indianapolis Metropolitan Police Department likely will have to return more than $273,000 in cash seized as part of a racketeering investigation after the Marion County Prosecutor's Office missed a civil forfeiture deadline," reports Cory Schouten on IBJ.com.

"Law enforcement officers turned the case over to the Prosecutor's Office Grand Jury division, which continues to investigate. And the locally based Garrison Law Firm, which Prosecutor Carl Brizzi hired several years ago to handle select forfeiture cases in exchange for 30 percent of the take, began working on a case under federal racketeering statutes.

"But no one—not Garrison nor anyone at the Marion County Prosecutor's Office—filed the paperwork necessary to keep the seized cash within 180 days, as required under state law. Each party blames the other for the oversight."

The NCAA executive committee selected University of Washington President Mark A. Emmert to lead the national association that oversees college sports, reports the Indianapolis Business Journal. Emmert, who is expected to start work by 1 November 2010, replaces the late Myles Brand, who died of pancreatic cancer in September 2009.

It cost about $184 million to build Conseco Fieldhouse 11 years ago. Today, the CIB owes $214 million in principal and interest on the building. Sound familiar? The same thing was true of the RCA Dome. We owed more on it when we imploded it to build LOS than what it cost to build more than two decades earlier. That's because the CIB has never been forced to live within its means."

More at Advance Indiana.
Posted by Indianapolis Observer at 10:25 AM No comments:

Keynote speaker is David Satcher, M.D., PhD., director of Satcher Health Leadership Center at Morehouse School of Medicine and Poussaint–Satcher–Cosby Chair in Mental Health who served as the 16th Surgeon General of the United States.

It's sponsored by the Indiana Minority Health Coalition. For more information, contact Kenneth B. Durgans.

Tonight's IPS Board Meeting Should Be Interesting

Kyle Olson, vice president of the Education Action Group Foundation, will address the Indianapolis school board tonight (20 April) regarding the legally-questionable eviction of an EAGF film crew from a school board budget meeting on 24 March.

Tonight’s school board meeting is at 7 p.m. at the school district administration building.

EAGF, a Michigan-based 501(c)(3) non-profit, is currently producing a feature-length documentary film on American public education, focusing on Michigan, Indiana and Illinois. Our film crew, comprised of Olson and videographer Don VanderKooi, was attending the 24 March IPS public budget meeting as part of that project.

Unfortunately our crew was only able to attend about 40 minutes of the meeting, because School and Community Relations Director Mary Louise Bewley suddenly ordered them to leave, with police escort, claiming they were there for "disingenuous reasons." Other members of the audience, including at least one working reporter, were allowed to stay.

The entire episode was captured on film and is available on YouTube here.

After the incident, Olson filed a formal complaint with the Office of Public Access Counselor, citing the denial of our right to attend a publicly advertised meeting.

Olson plans to call for more transparency and will seek to obtain the opinions of the school board members on the situation.

He will be available for comment after the meeting.
Posted by Indianapolis Observer at 4:42 PM No comments:

Included in the Fire Department Instructors Conference, today through Saturday (24 April) are more than 24 hands-on training H.O.T.® evolutions, 34 preconference workshops, and more than 160 classroom presentations. It's said to be "the largest, most comprehensive, and most beneficial training opportunity nationally and internationally for all levels of fire service practitioners". Sessions are in the Indiana Convention Center and in Lucas Oil Stadium in downtown Indianapolis.
Posted by Indianapolis Observer at 9:48 PM No comments:

"Ballard is too stupid to understand that if the Pacers bail, the Simons will have to pay us a break up fee of about $150 million. Who gives a damn if the Pacers are no longer playing at Conseco Fieldhouse? We can pay off the debt on the building with that kind of money."

Pacers Would Pay Big if They Moved

"Moving the Indiana Pacers from Conseco Fieldhouse to another city would impose serious financial hardship on the franchise, according to one interpretation of the team’s 10-year-old deal with the city....

"The lease for the city-owned fieldhouse stipulates the Pacers organization would have to pay at least $50 million to the city if it vacated the venue, which opened in 1999."

There's more from IBJ.com here.
Posted by Indianapolis Observer at 3:22 PM No comments:

This Indianapolis Observer weeps to see the depths of cronyism Indy has descended to under the current mayor. Take over management of Conseco but give all of Conseco's income to the Pacers? Well, why not! The taxpayers already pay for Lucas Oil Stadium but give all the revenue it generates to the Colts! And don't get me started on the giveaway of the water company. Or Brizzi's idiocy (especially re Durham).

Indy was on an upward track (launched by Lugar and Hudnut, who actually seemed to have the city foremost in their minds, not their bank accounts), but under Ballard, it seems to exist only to enrich the politically-connected.
Posted by Indianapolis Observer at 3:17 PM No comments:

"The Indiana Pacers are sending their strongest signal yet that if the city of Indianapolis doesn’t come up with $15 million a year to take over the operational costs of Conseco Fieldhouse, they’ll leave and go to another city," reports Abdul Hakim-Shabazz.

Leaving aside the question of whether the Pacers could actually carry through on their threat (not likely say attorneys familiar with the contract), this Indianapolis Observer replies with a big yawn.

Don't let the door hit ya on the ass on your way out of town, guys! Good riddance!
Posted by Indianapolis Observer at 9:24 PM No comments: 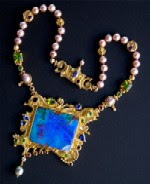 The Christel DeHaan Fine Arts Center Gallery at the University of Indianapolis is closing out its 2009-2010 season with a jewelry exhibition. "Neo-Rococo: Rocks & Shells Interpreted in Contemporary Jewelry Design" runs through 30 April at the UIndy campus, 1400 East Hanna Avenue, Indianapolis. The exhibition, sponsored by the Talbot Street Art Fair, is open from 9 a.m. to 9 p.m. weekdays. Admission is free.

Featuring pieces by six designers from around the country, the exhibition highlights the use of rocks, gemstones and shells in jewelry design. Featured artists are Helen Blythe-Hart of Atlanta, Ga.; Jim Cotter of Vail, Colo.; Professor Randy Long of Indiana University’s metalsmithing and jewelry design program; Jennifer Howard Kicinsk of Seattle, Wash., and Tracy Lee Black and Molly Gabbar of San Diego, Calif.
Posted by Indianapolis Observer at 12:02 AM No comments:

Musings on the Library

This Indianapolis Observer, reflecting on the current funding crisis for the Indianapolis-Marion County Public Library, notes that s/he has never set foot in the new Central Library downtown. However, s/he visits the neighborhood branch two or three times every month.

Is there some sort of better use for the Central Library? More marketing as an event venue, for example? Not sure Indy needs it as a "library".
Posted by Indianapolis Observer at 2:15 PM 2 comments:

Keep Indianapolis Beautiful, Inc. (KIB) was recently named as one of the Best NonProfit Organizations to Work For for 2010, reports Inside INdiana Business. The annual list of the “Best NonProfits” was created by The NonProfit Times and Best Companies Group.
Posted by Indianapolis Observer at 11:09 AM No comments:

"[Indianapolis Mayor Greg Ballard] now concedes that a major priority in his plan to spend money derived from the sale of the utilities will include economic development, which of course means the Capital Improvement Board. Yes, Ballard will use that money to give a $15 million a year subsidy to the billionaire Simons so they won't take their team to another city."

Branches To Be Trimmed from Library?

The Indianapolis-Marion County Public Library may decide to close six of the the system's 22 branches in an effort to close a widening budget gap, reports the Indianapolis Business Journal. The six are Glendale, Brightwood, Flanner House, Fountain Square, Spades Park and West Indianapolis.

The library plans to hold focus group discussions and staff forums to gather feedback on the cost-cutting options, reports the IBJ. Public forums are planned for 6:30 p.m. 10 and 12 May at the Library Services Center, 2450 North Meridian Street, Indianapolis. The board is expected to make a decision in June.
Posted by Indianapolis Observer at 9:22 PM No comments:

The One Bright Spot...

According to Inside INdiana Business, The NCAA says the 2010 Men's Final Four in Indianapolis was the second most attendance in the history of the event. The combined attendees for this year's Final Four was 142,228, trailing only Detroit last year which attracted 145,378 for the three games. Attendance for last night's national championship contest at Lucas Oil Stadium was also the second highest ever. The NCAA says 70,930 were in the stands to watch Butler's 61-59 loss to Duke, second only to last year's mark of 72,922.
Posted by Indianapolis Observer at 9:08 AM No comments:

Read more about Butler basketball here.
Posted by Indianapolis Observer at 11:45 AM No comments:

Butler University's in the final matchup of the 2010 Final Four!
Posted by Indianapolis Observer at 4:47 AM No comments:

The Star Apologizes to Duke University

According to the Associated Press, "The Indianapolis Star newspaper has apologized to Duke University after some of Friday's editions included an illustration of coach Mike Krzyzewski with horns and a target drawn on his head.

"The illustration on the front of the sports section accompanied a story titled 'Despising Duke' that detailed how some fans strongly dislike the Blue Devils' program."

Ah! That wonderful Hoosier hospitality is on display again!
Posted by Indianapolis Observer at 7:42 AM No comments:

Seeing Ourselves as Others See Us

Hosting the Final Four means that lots of sites are writing about Indy. This is one of 'em:

"If you are a beer-loving basketball fan or an alumni taking a road trip to this weekend’s Final Four games at Lucas Oil Stadium in Indianapolis, you’d best pack your cooler and plan to tailgate – no beer will be sold in the arena. NCAA rules prohibit it."

The posting includes suggestions on where to quaff your favorite brew, depending on which team you're cheering for.
Posted by Indianapolis Observer at 12:44 PM No comments:

Indy Decides (Once Again) Not to Join 21st Century

Why does this matter? "It means that tens of thousands of Marion County voters won't have the chance to vote early at satellite sites conveniently located close to their home or work."
Posted by Indianapolis Observer at 9:59 AM No comments: