This Indianapolis Observer wonders why the city's oldest still-operating ethnic restaurant was left out of the story. Yes, folks, I'm talking about the Rathskeller, which has been serving German food in the Athenaeum since 1898.

Posted by Indianapolis Observer at 2:16 PM No comments:

Preparing for the Zombie Apocalypse

The Indiana Historical Society doesn't want Hoosiers to be caught unawares by the rise of the living dead.

It has scheduled an informational session at 7 p.m. 19 June in the Indiana History Center, 450 West Ohio Street, Indianapolis, to help everyone prepare.

According to the notice, "representatives from the Indiana State Department of Health will share tools on how to prevent Virus-Z infection, while trained experts from Indiana's Department of Homeland Security will demonstrate coordinated response strategies to the brain-eating hordes."

If that weren't enough, "Indy Trade School will teach you how to barter in the new world order, and you'll also learn survival skills from zombie-fighting veterans with military and public safety experience."

The final session is perhaps the most crucial: IHS staff will prepare you with the needed tools to record the memories of zombie apocalypse survivors."

Are they kidding? There's no hint that it's all tongue-in-cheek: "preparedness is your best defense".

Now that your Indianapolis Observer has your attention: remember that curbside recycling, residential and heavy trash collection will operate on a slide schedule next week due to the Memorial Day holiday.

All residential trash, heavy trash and curbside recycling routes will run one day behind for the entire week.

All services will return to normal schedules on Monday, June 3.
Posted by Indianapolis Observer at 12:00 PM No comments:

Somebody Needs a New Job 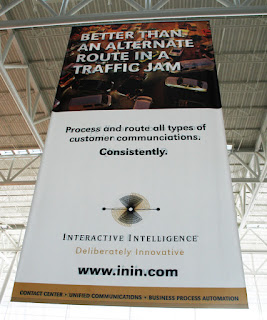 This Indianapolis Observer wonders: Can't anyone spell correctly any more?

Interactive Intelligence needs to fire (or at least ridicule in public) the people who wrote the copy for and those who approved the final version of this humongous banner hanging in the Indianapolis International Airport.

C'mon, no one noticed the misspelling? Surely Don Brown didn't approve this before it went up....

Posted by Indianapolis Observer at 5:39 PM No comments:

The annual gala sponsored by the Japan-America Society of Indiana is set for 11 June in the Indiana Roof Ballroom, 140 West Washington Street, Indianapolis. The event celebrates the 25th anniversary of the organization, which promotes friendship, exchange and cooperation between Indiana and Japan.

Special guest will be sumo wrestling star Yasokichi Konishiki, who is the first foreign-born wrestler to reach ozeki (the second highest rank) in Japan's national sport.

Pawel Fludzinski, immediate past president of the Japan-America Society of Indiana, will receive the Bridge of Friendship Award. The government of Japan's Order of the Rising Sun, will be awarded to Robert H. Reynolds, Honorary Consul General of Japan at Indianapolis.

A reception for patrons begins at 5 p.m., with the general reception at 6 p.m. followed by the dinner and program beginning at 6:30 p.m. Business or traditional Japanese attire is requested.

Posted by Indianapolis Observer at 2:53 PM No comments:

"Today [11 May 2013, Gov. Mike Pence] signed the second worst bill passed by the legislature this year, SB 621, which strips the Indianapolis City-County Council of power in order to make the most corrupt mayor in the history of Uni-Gov more powerful and unaccountable to the public."

This Indianapolis Observer is appalled, and the Indiana GOP should be deeply ashamed.

Posted by Indianapolis Observer at 6:29 PM No comments: 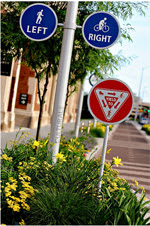 Now, here's an urban amenity that no other city has: the Indianapolis Cultural Trail.

The grand opening of the eight mile meticulously designed and landscaped pedestrian and bicycle pathway connecting five of Indy's Cultural Districts plus downtown kicks off with a ribbon cutting at 3:45 p.m. Friday (10 May) outside the Indianapolis City Market at Market and Alabama streets (map).

The “Get Down On It” celebration begins Saturday (11 May) with more than 80 different family-friendly programs spaced out along the entire trail.

Programs include musical and artistic performers, dancers, balloon rides and more. See all of the programs, performance times and locations online. All “Get Down On It” programs are open to the public, and most are free.

Your Indianapolis Observer is planning on participating in Saturday's Parasol Parade, but can't decide which band to follow (starting about 10 a.m.).

Major props to Brian Payne, President and CEO of the Central Indiana Community Foundation and the Indianapolis Foundation, for thinking up this fabulous feature and figuring out how to implement it, and to Gene and Marilyn Glick for being major donors of the project. A legacy to be proud of, indeed! 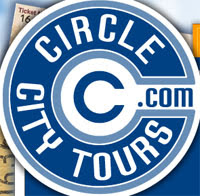 Your Indianapolis Observer once provided Indianapolis tours, but there wasn't enough of a demand to keep the business going.

It seems things have changed, since Circle City Tours has been around for several years now.

Have you taken one of their tours? Which one?

Posted by Indianapolis Observer at 3:56 PM No comments: