A Luncheon with Hapsburg Royalty 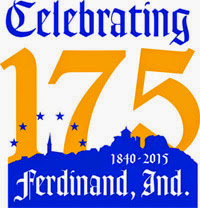 A luncheon reception in honor of the Archduke and Archduchess of Austria, Markus Salvator and Hildegarde von Habsburg-Lothringen, will be held from 12:15 to 2 p.m. 19 September 2014 in the first floor auditorium ballroom of the Athenaeum, 401 East Michigan Street, Indianapolis, Indiana.

It's sponsored by the Indiana German Heritage Society.

Tickets at $20 per person are available online; registration deadline is 15 September 2014.

The royal pair are visiting Indiana to help commemorate the 175th birthday of Ferdinand. The archduke is the great-great-great-nephew of Emperor Ferdinand I of Austria, for whom the town was named.

Archduke Markus and his wife reside at the Kaiservilla in Bad Ischl, Upper Austria, the former summer residence of Emperor Franz Joseph I and Empress Elisabeth of Austria.

They will arrive in Ferdinand 20 September, to attend the Ferdinand Folk Festival. Joining them will be two relatives who now live in the states, Renate Princess Windisch-Graetz and Count Ferdinand Graf von Seefried auf Buttenheim.