In Gov. Michael Pence's "State of the State address earlier this month he said 'religious freedom' needed to be prioritized over LGBT rights and that 'no one should ever fear persecution because of their deeply held religious beliefs'."

(This snippet is from The Huffington Post, noting that Gov. Pence is at it again -- doubling down on legalizing discrimination.)

As the article points out, "business leaders have got to know that, ultimately, if Pence wins by promoting homophobic laws, it's a long-term loss for them. The majority of Indiana residents support LGBT rights."

This isn't trivial political posturing. Remember, folks, having a bigot as governor and passing laws that discriminate against LGBT Hoosiers has real-world consequences for our state.

"A new survey from Visit Indy to be released this week reveals Indiana lost at least $60 million due to the RFRA controversy last year. That number will likely pale in comparison if the state passes anti-gay laws this year, or even has a flashpoint around the issue in the national media. More businesses will stay away from Indiana, and the pressure will only build on businesses in the state."

Posted by Indianapolis Observer at 7:00 AM No comments:

There will be NO residential trash, heavy trash or curbside recycling service Monday (18 January) in observance of Martin Luther King Jr. Day.

All routes will resume Tuesday (19 January), and will run one day behind for the entire week.

All routes will return to normal schedules Monday (26 January).

The next holiday observed by Solid Waste services will be Monday (30 May -- Memorial Day).

This cancellation applies to all DPW trash routes and all trash routes serviced by contracted trash collectors.

Weather permitting, trash operations will operate on a slide schedule with Wednesday's routes being picked up tomorrow, Thursday's collected on Friday, and so on.

This Indianapolis Observer notes that the city waited until afternoon to announce this, although trash collection ostensibly starts at 7:30 a.m.

Posted by Indianapolis Observer at 1:10 PM No comments: 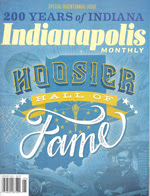 It is, hands down, the best primer for the Hoosier State's bicentennial year that this Indianapolis Observer has ever seen.

This issue is a keeper.

Posted by Indianapolis Observer at 5:01 PM No comments: