Where No One Has Fun

Urban entertainment districts: Blocks where no one has fun:
"Cities keep trying to create downtown cool with dull nightlife districts. But who wants to hang out at the mall?"

This Indianapolis Observer wonders when will they ever learn*.

(Tip of the hat to Pete Seeger) 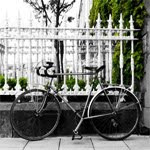 Expensive bikes have been disappearing from downtown Indianapolis even though they've been locked up, reports IBJ.com.

Police say at least five locked bikes have been stolen in a small area of downtown near Massachusetts Avenue in the past 10 days. Two of the theft victims lost bikes worth $1,800 to $2,000.

An employee at Bicycle Garage Indy in the downtown Indy Bike Hub said the thieves are targeting high-end bikes. He said the thieves are using cable cutters to defeat the bike locks. He recommended riders who leave their bikes unattended in public places invest in a rigid metal u-lock, which is more secure.

Posted by Indianapolis Observer at 3:53 PM No comments:

A date to get on your calendars early:

According to Provocate.org, Indianapolis is poised to become a truly international city, both by the involvement of Hoosiers in projects all over the world, and by the participation of young professionals from across the world who come to Indianapolis for education and engagement.

We are drawing on a diversity of ethnic, religious, and cultural resources to develop fresh approaches to making a difference for global impact.

A dynamic network of these young leaders, led by students from China, will lead a discussion of how philanthropy is impacting their home countries and their own careers, and how Indianapolis can foster international philanthropy as an integral part of emerging onto the global stage.

Shari'a Beyond the Headlines

"Shari'a Beyond the Headlines" is the topic for a workshop presented by The Cen­ter for Inter­faith Coop­er­a­tion, Indiana University School of Lib­eral Arts at Indiana University-Purdue University in Indianapolis, and the Mus­lim Alliance of Indiana.

The workshop, free and open to the public, takes place at the Indiana Interchurch Center, 1100 West 42nd Street, Indi­anapo­lis, from 11:30 a.m. to 5 p.m. 14 June. For more information and to register, go online.

Over a dozen states have con­sid­ered or are con­sid­er­ing anti-shari’a leg­is­la­tion. What’s all the fuss about? And what is shari’a any­way?

The work­shop is an intro­duc­tion to the shari'a con­tro­versy in the United States. Join local schol­ars, legal experts, and Jew­ish, Chris­t­ian, and Mus­lim com­mu­nity mem­bers for a work­shop on the shari’a, its mean­ing to Mus­lim Hoosiers, and the larger role of reli­gious law in American society.

Fund­ing for this activ­ity was pro­vided by the Coun­cil of Amer­i­can Over­seas Research Cen­ters through a grant from Carnegie Cor­po­ra­tion of New York. 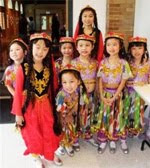 The Asian American Alliance of Indiana is partnering with IndyParks for a full day of fun, including ethnic dance and music, colorful costumes, Asian cuisine, art and cultural displays, Asian-related businesses, and civic groups.

Admission is free, but bring some coin (and your appetite) to sample Asian cuisine on offer from local restaurants. Enjoy traditional Asian music and dance presented throughout the day.

Stroll through the Garfield Arts Center to see Asian art – both old and new – on display.
Posted by Indianapolis Observer at 12:00 AM No comments:

Here's an idea: "We need to seek balance and manage public land for fewer deer. Reducing deer numbers will mean healthier forests, fewer ticks and more warblers each May."

This Indianapolis Observer is really tired of having her backyard hosta nibbled by herds of free-range white tail deer.

Read the rest of the opinion piece (from The New York Times) here.

Posted by Indianapolis Observer at 12:53 AM No comments:

Just in time for this year's running of the Indianapolis 500-Mile Race, the National Art Museum of Sport, 850 West Michigan Street, Indianapolis, has a blockbuster exhibit scheduled with more than 30 paintings, sculptures, photographs and installations on all kinds of races: auto, motorcycle, kayaking, bicycling, running, swimming, triathlons, horse racing.

“Speed and Motion: Racing to the Finish Line” opens with a reception from 5:30 to 7:30 p.m. 23 May -- and all of the artists will be attending. Tickets are $25 each and include admission to the exhibit and opening-night reception, light hors d’oeuvres, and two complimentary beverages of choice, followed by a cash bar.

Two months before its PBS premiere, take a 90-minute journey across nine countries and over 1,400 years of history, art and architecture beginning at 7 p.m. 18 May in the Toby Theatre, Indianapolis Museum of Art, 4000 Michigan Road, Indianapolis.

“Islamic Art — Mirror of the Invisible World” is a film that explores the richness of Islamic art, from great ornamented palaces and the play of light in monumental mosques to the exquisite beauty of carved boxes and metal work.

The film also examines the unique ways in which Islamic art incorporates calligraphy and the written word, and transforms water into an expressive art form. Narrated by Academy Award winning performer Susan Sarandon, the documentary finds commonalities in a shared artistic heritage with the West and East. A member of the production team (Unity Productions Foundation) will be present.

The screening is preceded by a brief presentation about an exhibition scheduled at the IMA from 2 November 2012 to 13 January 2013: "Beauty & Belief: Crossing Bridges with the Arts of Islamic Culture".

Greening in the Heartland 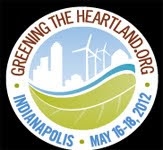 "Greening the Heartland 2012" explores interdependent elements of sustainability during a conference 16 through 18 May in the Indiana Convention Center, Indianapolis.

The theme this year is Building Community.

The organizers note: While green buildings are critical components in the design of sustainable communities, their key advantages rely on relative pathways and infrastructure - a context we will address in the conference as watts, water, waste and wheels. Providing our buildings with clean energy, a precious supply of water, the efficient use of materials while minimizing waste, and a convenient and sustainable means of arrival results in truly green buildings and sustainable development.

”Ignorance, Experience, & Success in Business" is the fourth part of the China Business Proficiency Series sponsored by the America China Society of Indiana. Speakers are Dan Miller, Executive Director of the Institute for Global Enterprise in Indiana, and Ting Gootee, Vice President of Investments at Elevate Ventures. The session takes place from 9 a.m. til noon 1 June in Bingham Greenebaum Doll, 2700 Market Tower 10 West Market Street, Indianapolis. Breakfast and materials will be provided.
Posted by Indianapolis Observer at 12:00 PM No comments:

The last of this season of Classical Concerts at the Central Library takes place at 2 p.m. 13 May (Sunday).

It's free and families are welcome (what better treat for Mom on Mother's Day!).

The End is Near?

More of the national reaction here: The loss of Dick Lugar will hurt most on foreign policy, where he was willing to buck Republican orthodoxy".

Can you hear the four horsemen of the apocalypse?

Posted by Indianapolis Observer at 8:54 AM No comments:

"[If Lugar loses], we’ll know that purification of the GOP is coming right along."

"[Jim] Bopp, like the other Mourdockians, hopes that a Lugar loss will put the fear of Tea back into Republicans."

This Indianapolis Observer remains appalled at the current state of political discourse in the United States.

UPDATE
Re the Indiana showdown between Lugar and Mourdock: "A multitude of super PACs and social-welfare nonprofits inundated the state, spending $3.6 million on television advertising, direct mail, phone calls and even a Tea Party Express bus stop. Most of that money came from groups opposed to Lugar. They outlaid $2.3 million compared with the $1.2 million spent by pro-Lugar groups."

Yes, folks: IPS' inability to control bullying has made the international press. Here's the report in the Daily Mail, a newspaper in the United Kingdom.

Posted by Indianapolis Observer at 5:06 PM No comments:

More on Mourdock vs. Lugar

According to the Huffington Post: "A retired Indiana state trooper has asked the Securities Exchange Commission to investigate whether state Treasurer Richard Mourdock, a candidate for Senate, broke pay-to-play rules in offering a contract to manage police pension money while he was raising campaign cash from Wall Street."

Posted by Indianapolis Observer at 2:46 PM No comments:

The fifth annual "Back to the Future: A Mid-Century Modern Home Tour" on 2 June will feature five homes on Indianapolis’ north side.

Owners of the mid-century homes opening from 1 to 6 p.m. are:

In ’50s and ’60s America, when the homes featured on this tour were being built, many people considered Victorian architecture dated and ugly. As a result, countless architectural gems were lost to the wrecking ball.

Indiana Landmarks and its Indiana Modern committee are working to protect Modernist buildings from a similar fate and foster appreciation for the style. Proceeds from the "Back to the Future" tour support the organization’s efforts to preserve and promote fine examples of Mid-Century Modern architecture throughout the state.

Ticket holders can take the tour in any order, picking up a program at any house or stopping first at Second Presbyterian Church to catch a shuttle that will circulate among tour homes. Second Presbyterian, designed by McGuire, Shook, Compton, Richey & Associates in 1958, shares the mid-century vintage if not the appearance of the tour homes.

Tickets are $15 per person on the day of the tour at Second Presbyterian Church.

On 31 May, the Indiana Modern committee joins with the Design Arts Society of the Indianapolis Museum of Art to present a free lecture, "Modernism is for Everyone", by California architect, critic and preservationist Alan Hess. Hess led the effort to save the nation's first McDonald's in Downey, California. His books include The Ranch House and Googie Redux: Ultramodern Roadside Architecture. The lecture takes place at 6 p.m. in The Toby at the IMA, 4000 Michigan Road, Indianapolis.

For more information on either event, go online.

Posted by Indianapolis Observer at 11:30 PM No comments:

The Taggart Memorial in Riverside Park is the only Indy structure on the "10 Most Endangered" list of Indiana Landmarks for 2012.