The Indianapolis Department of Public Works would like to remind residents that there will be NO curbside recycling, residential or heavy trash collection on Wednesday (4 July) in observance of Independence Day.

Posted by Indianapolis Observer at 3:04 PM No comments: 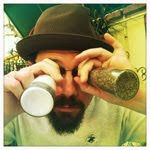 Get on over to the marina at Indy's Eagle Creek Park for the 11 a.m. "family fun" concert Saturday (30 June) by Secret Agent 23 Skidoo.

The "King of Kid-Hop" Secret Agent 23 Skidoo is an Asheville, North Carolina-based musician who presents hip hop for kids with a sound that's all grown up. He's been on the national stage since 2008, rapping about the challenges changes all kids face growing-up.

Tickets are $7 at the gate, which includes the park entry fee. Children aged 2 and Under are free.

Posted by Indianapolis Observer at 6:09 PM No comments:

Posted by Indianapolis Observer at 11:58 AM No comments:

Party at the IMAX Tomorrow Evening

The IMAX Theater in the Indiana State Museum, White River State Park, downtown Indianapolis, is throwing a free party to celebrate the addition of local beer and wine sales as part of the Downtown Indy IMAX experience going forward.

Thanks to a recently acquired liquor license, over-21 movie goers will be able to enjoy locally crafted adult beverages starting tomorrow (27 June) for all features after 5 p.m.

The Open House party from 6 to 8 p.m. tomorrow will feature live entertainment from Indy’s own DJ OhBeOne, free samples from Sun King Brewery, Upland Brewing Co., Easley Winery, Just Pop In popcorn, coffees and teas from Hubbard and Cravens, fresh sweets from Albanese Candy Company and other foods and beverages.

Those attending the public open house will be treated to the premier of a locally produced animated film: Atlantians in America, which is a tale about a candy farmer named Drake, in the underwater city of Atlantis. Drake decides to go to America to sell his farm-grown taffy himself versus relying on the American Candy Middle Men. Throughout his journey he runs into some interesting characters and quickly finds out that selling his crop is much more challenging than he imagined. The film is a hand-drawn animation crafted by Adam DeBolt.

The address of the Indiana State Museum is 650 West Washington Street, Indianapolis. The Open House is from 6-8 p.m. 27 June, with the film premiere starting at 7 p.m.

Posted by Indianapolis Observer at 4:59 PM No comments:

"Ken Falk with the American Civil Liberties Union of Indiana says the Indiana law goes further than the Arizona law because it allows police to arrest immigrants who haven't committed a crime."

"Falk says the Indiana law is a 'clear violation of the Fourth Amendment'."

Posted by Indianapolis Observer at 3:00 PM No comments:

Come One, Come All to the Big Top Circus at the 37th annual Ice Cream Social set for 11 a.m. to 3 p.m. 4 July on the lawn of the Benjamin Harrison Presidential Site, 1230 North Delaware Street, Indianapolis.

The Victorian Circus has come to town and raised their tent! Mix and mingle with the circus actors, like our stilt walking Uncle Sam, as well as members of Harrison's family, staff and friends.

Admission includes a walk-through tour of the home of the 23rd President of the United States complete with visits with enactors.

Children of all ages will enjoy attending a one-day Circus Camp where you can learn to juggle, walk the tight rope or balance a spinning plate. Children can also have their face painted, make patriotic crafts and explore the grounds on the Passport to History treasure hunt.

The whole family will enjoy a variety of lawn games and the sweet Dixieland sound of the White River Jazz band playing live music. And, don't leave without a visit to the Declaration Depot for a visit with Thomas Jefferson. He will likely ask you to pick up the quill and sign your own name to this historic document.

"Fox News made a BIG mistake while discussing the Jerry Sandusky trial on Saturday.

"While the hosts were explaining the verdict, the network accidentally showed stock footage of Indiana Governor Mitch Daniels.M\

Shaila Dúrcal is the headline entertainer at the Indiana Latino Expo, tomorrow (23 June) in the Champions Pavilion and the Marsh Blue Ribbon Pavilion at the Indiana State Fairgrounds in Indianapolis.

The Half Price Books Clearance Sale is Friday through Sunday (22 through 24 June) in the Agriculture/Horticulture Building at the Indiana State Fairgrounds in Indianapolis.

Posted by Indianapolis Observer at 2:15 PM No comments:

Mourdock: "Employers Should Not Have To Cover Cancer"

Indiana's in the national news, again.

This time it's Richard Mourdock's statements.

Snippet: "Mourdock, the state treasurer, argued in a newspaper interview last week that not only should employers not have to cover health care services that they oppose, such as contraception, but they also should be exempt from paying for anything they do not want to include, based on costs." 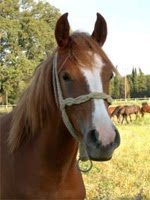 The Region 13 All Arabian Horse Show takes place 20 through 24 June at the Indiana State Fairgrounds in Indianapolis.

It's so big, you'll find it in the Pepsi Coliseum, West Pavilion and South Pavilion from 8 to 10 p.m. Wednesday, and starting at 8 a.m. Thursday through Sunday. Admission is free.

You can read/watch the whole thing here, but the Indiana-centric snippet is this:

Bill Maher: “Dan Quayle was Sarah Palin . . . long before [they had her],” he chided. “John McCain did not invent the bimbo running mate. George Bush the first did.”

Posted by Indianapolis Observer at 2:09 PM No comments:

Those of you still against Sunday alcoholic beverage sales in Indiana might want to read this: "Who's Afraid of Sunday Liquor Sales?"

Snippet:"By permitting Sunday sales, [liquor] stores would essentially either have to stay open on Sunday or else risk losing sales to other stores who open on Sunday. That means longer workweeks for store owners."

This Indianapolis Observer wonders what level of lobbying causes this category of merchant to deserve protection from competition.

Posted by Indianapolis Observer at 3:17 PM No comments: 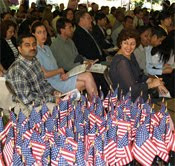 Families and friends of these celebrants will be present to witness this exciting day -- and you're invited to be a part of it. Judge Sarah Evans Barker will preside over the court ceremony that will take place in a tent on the south lawn with seating available for 300 people.

Parking will be available at: the Knights of Columbus Parking Lot (NE corner of Delaware and 13th streets) and all along Delaware Street (free and non-permit). Admission is free.

The City of Indianapolis forecasts tomorrow (9 June) as a Knozone Air Quality Action Day for ozone. The region’s air quality may become unhealthy for individuals who are sensitive to air pollutants and may be categorized as “orange” on the Air Quality Index (AQI).
Posted by Indianapolis Observer at 8:44 PM No comments:

Ever heard a ukelele superstar? Jake Shimabukuro will perform at the annual gala sponsored by the Japan-America Society of Indiana. Shimabukuro, it's said, has taken the four-string, two-octave instrument to places no one has gone before. His repertoire includes jazz, blues, rock. bluegrass, classical and folk.

The gala will be held 12 June in the Indiana Roof Ballroom, 140 West Washington Street, Indianapolis. It begins with a reception for patrons at 5:30 p.m., continues with a general reception at 6:30 p.m. and finishes with a dinner and the program beginning at 7 p.m.

Tatsuhiro Shindo, chief executive director of Japan External Trade Organization-Chicago, will discuss "Road to Recovery: Rebuilding Japan after the Disasters," and the Japan-America Society of Indiana will report on its earthquake relief funds activity.

Proceeds from the evening benefit the Japan-America Society of Indiana and its efforts to promote friendship, exchange and cooperation between Indiana and Japan.

Hoosiers are in the news again, and not exactly in a good way.

"The driver, 73-year-old Jack Thomas, is seen in the video desperately trying to hang onto the steering wheel as the Carmel Clay School bus crashes through a fence, and takes out a tree and a play set before hitting a garage."

See it all here.

Posted by Indianapolis Observer at 12:11 AM No comments: 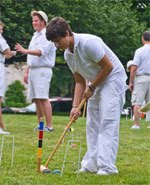 One of Indianapolis’ quintessential summer events is the Wicket World of Croquet® tournament, hosted each June on the lawn of the Benjamin Harrison Presidential Site, 1230 North Delaware Street Indianapolis.

This year, in addition to the traditional six wicket tournament, families will have an opportunity to learn the rules of the game as adults have fun playing alongside their children, at the "Queen for a Croquet- Kid’s Croquet with Alice" inaugural event.

This Alice in Wonderland themed event is designed as a way for children to learn about Victorian life through sport and literature. Each team of two (one adult and one child) will be given a croquet tutorial and a chance to participate in a match of golf croquet.

The Alice and Friends Children’s Croquet Day includes the use of equipment, a mid-morning snack, complimentary photos with the characters, and an Alice in Wonderland themed favor.

Children will delight at the opportunity to play alongside characters from the beloved children’s book including, the Queen of Hearts, Mad Hatter, March Hare and Alice*. (*Characters may change subject to availability).

Alice and Friends Children’s Croquet Day will take place beginning at 10 a.m. 16 June. Cost per team of two is $50. To purchase a ticket, or to register your team for the tournament call 317:631-1888 or click here.

Proceeds from this event will be used to fund educational programs at the Benjamin Harrison Presidential Site, which welcomes more than 15,000 students each year.

The Benjamin Harrison Presidential Site, a 16-room Italianate style house, was constructed by Harrison in 1874 and is a National Historical Landmark recognized by the United States Department of the Interior. The non-profit organization is dedicated to increasing public understanding of, appreciation for, and participation in the American system of self government through the life stories, arts and culture of an American President.

Extraordinary Hoosiers will be honored for their contributions to Indiana and the nation during the annual "Living Legends Gala" set for July 20, 2012, in the Indiana History Center, 450 West Ohio Street, Indianapolis This year, those honored are the Lacy family, Gerald and Dorit Paul, and Max Shumacher. The black-tie affair begins at 6 p.m. with a reception honoring the Living Legends, a gourmet dinner, dessert and coffee, and the awards ceremony. Tickets are $250 or $350 for patrons; all but $75 is a tax-deductible gift in support of IHS statewide educational programs.
Posted by Indianapolis Observer at 12:00 PM No comments: