What Were They Thinking?

NUVO's Dave Hoppe has a chilling article in this week's issue of the newsweekly about a very strange decision by Indiana University-Purdue University in Indianapolis.

IUPUI employee (and student) Keith John "Sampson received a letter, dated Nov. 25, 2007, from Lillian Charleston, of IUPUI’s Affirmative Action Office. The letter begins by saying that the AAO has completed its investigation of a coworker’s allegation that Sampson 'racially harassed her by repeatedly reading the book Notre Dame vs. the Klan: How the Fighting Irish Defeated the Ku Klux Klan by Todd Tucker in the presence of Black employees'."

This Indianapolis Observer is astonished. What in the world is going on in the administrative offices of IUPUI?

UPDATED (10 March):
The story's been picked up by Townhall.com. As Kathleen Parker writes, "What could be more hostile in a university environment than investigating a student's reading choices on the basis of a bystander's perceptions? That's not just hostile, but sinister."

Still nothing in The Indianapolis Star, though. This Indianapolis Observer wants to know why? Other than the fact that The Star no longer knows what local news is.... (What's with the new "My Life" section instead of "Indiana Living" if not an admission that they're clueless about Indy?)
Posted by Indianapolis Observer at 8:07 PM No comments:

The New York Times reports on a new drug for schizophrenia developed by Darryle D. Schoepp at Eli Lilly & Company in Indy. In a change from traditional treaments, this drug focuses not on dopamine but instead on the effects of glutamate, another powerful neurotransmitter.

"Schizophrenia is notoriously difficult to treat, and Lilly’s drug — known only as LY2140023 — relied on a promising but unproved theory about how to combat the disorder," the article reports. "For 50 years, all medicines for the disease had worked the same way — until Dr. Schoepp and other scientists took a different path."

Lilly, reports The Times, continues to develop LY2140023 and has begun a trial of 870 patients that is scheduled to be completed in January 2009.
Posted by Indianapolis Observer at 8:30 PM No comments:

Eli Lilly and Co. has signed a two-year sponsorship deal with the organizers of the Indianapolis Tennis Championships. Terms for the deal, covering the 2008 and 2009 tournaments, were not disclosed.

The Indianapolis tournament is the first stop on the Olympus US Open Series. This year's dates are 12-20 July.
Posted by Indianapolis Observer at 10:53 PM No comments:

Martha Boden (left), executive director of the Humane Society of Indianapolis, has been elected treasurer of the Society of Animal Welfare Administrators, a nonprofit management organization comprised of professional administrators of organizations involved in the animal care and control field.
Posted by Indianapolis Observer at 8:13 PM No comments:

It's a Done Deal -- Finally

Indy Racing League founder and CEO Tony George and owners of the Champ Car World Series have completed an agreement in principle that will unify major American open-wheel racing for 2008, according to the Indy Racing League.

There's a treasure trove of information hidden away on Indianapolis' official city website. Look at the upper right hand corner of the opening page, and you'll see "site map". Click on it.

Want a contour map of your neighborhood? The county's ZIP code boundaries? Even a close up historical photo of your house? It's all here. Click to zoom in on a particular location. Enjoy!
Posted by Indianapolis Observer at 9:10 PM 1 comment:

Enjoy dinner and a play at the University of Indianapolis, 1400 East Hanna Avenue, this weekend and next. UIndy's annual dinner theater production, Red Herring will be presented Friday-Sunday (22-24 February) and again 29 February plus 1 March in the Schwitzer Center dining hall. Dinner's served at 6:45 p.m., with the performance starting at 8 p.m.

Three love stories, a murder mystery and a nuclear espionage plot converge in this blunt-nosed, sharp-eyed look at love and tying (and untying and retying) the knot. The spoof of noir spy movies was written by Michael Hollinger.

Watch for traffic challenges on Friday (22 February) as Republican presidential candidate John McCain comes to the Circle City for a fundraising visit. According to Inside INdiana Business, he'll arrive at Emmis Communications on Monument Circle at 9 a.m. Friday.
Posted by Indianapolis Observer at 7:55 PM No comments: 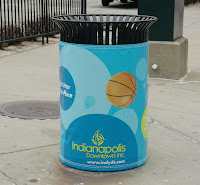 It doesn't take much to spiff up downtown Indy, at least according to Indianapolis Downtown Inc. They've sent out press releases to let us all know that we've got (drum roll, please) 155 "vibrant new trash wraps" throughout Downtown. Wow!

IDI's Cleaning Advisory Committee has transformed the trash receptacles by wrapping them in blue and green vinyl. "The wraps have an eye-catching design with bright basketballs and feature the phrases 'Put Litter in its Place' and 'Keep Downtown Clean'."

“Trash Wraps create a vibrancy and excitement for our visitors and Downtown neighborhood,” said Carol Mullins, beautification coordinator for IDI. Who'da thunk it?
Posted by Indianapolis Observer at 10:20 PM No comments:

Contemporary Fashion Comes to the IMA

With more than 120 pieces of contemporary fashion from the permanent collection of the Los Angeles County Museum of Art, "Breaking the Mode" examines designers who have made dramatic changes in the aesthetics of fashionable dress over the past 25 years.

What? A Bank Open on a Holiday?

The 190 Chase bank branches in Indiana will be open normal hours on President’s Day, Monday, 18 February. Chase is the U.S. consumer and commercial banking brand of JPMorgan Chase & Co.
Posted by Indianapolis Observer at 9:21 PM No comments:

A new exhibit opened over the weekend at the Indiana State Museum, 650 West Washington Street, Indianapolis. "Quilting Blocks & Binding Threads" includes 36 textiles, many from the museum’s Pottinger Collection of Indiana Amish Quilts, that were created lovingly over time by Hoosiers to mark milestones or comfort loved ones or strangers in times of need. Choosing their patterns and colors carefully, they cut and stitched their good wishes into a work of art.

During the exhibit (which runs through 15 June), there'll be hands-on activities and demonstrations to help unravel the meaning of these very special coverings, which warm the hearts of both creator and recipient.

Come and see what makes up Hoosier food culture! Susan Haller, executive director of the Indiana Foodways Alliance will talk about Indiana's Culinary Timeline and share some of the state's signature recipes during a presentation at noon 5 March in the Cole Porter Room of the Indiana History Center, 450 West Ohio Street, Indianapolis.

The Indiana Foodways Alliance is dedicated to the celebration, promotion and preservation of the authentic food culture of Indiana. The Alliance notes, "Our membership encompasses a field to table spectrum from agriculture to fine dining, with emphasis on all the specialty foods, farm markets, diners and hands-on restaurants in between that are so dear to the hearts of Midwesterners who love real food."
Posted by Indianapolis Observer at 10:28 PM No comments:

Central Indiana racing fans can take the green flag on the 2008 motorsports season by watching the Daytona "500" at the Indianapolis Motor Speedway Racing Kickoff Party on 17 February, the IMS announced.

The party will benefit the Rich Vogler Memorial Scholarship Fund, a program that began in 1990 in memory of the five-time Indianapolis "500" starter and multiple United States Auto Club Midget and Sprint Car champion (pictured at left) who lost his life in July 1990 in an accident at Salem (Ind.) Speedway.

Doors to the Indianapolis Motor Speedway Plaza Pavilion will open at 1:30 p.m., with the race broadcast scheduled to begin at 3:30 p.m. Admission is free, and an all-you-can-eat picnic lunch is available for $8.95 for adults and $4.95 for children under 12.

Attendees will enjoy car displays, including one of Rich Vogler's Midget racers, and see the Allstate 400 at the Brickyard trophy. The Allstate "400" at the Brickyard Fan Tour will be available for fans to experience in the Pagoda Plaza. Live and silent auctions also will be featured, with many exciting racing items up for bid.
Posted by Indianapolis Observer at 8:25 PM No comments:

Sagamore Gets Another Grant

Sagamore Institute for Policy Research announced today that it has received a $150,000 grant from the Estridge Family Foundation. This grant will support research, programming activity, and general operations through December 2010.
Posted by Indianapolis Observer at 5:19 PM No comments:

Some top civic leaders have created a not-for-profit organization to study and build a streetcar “circulator” system downtown, according to the Indianapolis Business Journal. The Downtown Indianapolis Streetcar Corp. would bring the electric vehicles to the streets for the first time since the 1950s. Envisioned is a fleet of streetcars (powered by overhead wires) that connects to other transit options, such as IndyGo buses.
Posted by Indianapolis Observer at 5:35 PM No comments:

The Old Centrum is scheduled to close at the end of March, reports Cory Schouten in The Indianapolis Business Journal, leaving an uncertain future for the former Central Avenue United Methodist Church at 12th and Central. The 80,000-square-foot Romanesque Revival structure was built in 1892.
Posted by Indianapolis Observer at 4:01 PM No comments: