Thrillist compiled the 21 best beer gardens in the United States, and our very own Rathskeller is first on the list.

Posted by Indianapolis Observer at 10:18 AM No comments:

"Rural counties across Indiana have been purchasing Afghanistan-surplus tanks with gunner turrets and heavy armor; most recently, it was Johnson County, whose Sheriff, Doug Cox, justified the purchase by saying, 'The United States of America has become a war zone'."

And, watch out for those land mines evidently littering that Hoosier county south of Indy.

It's even worse than this Indianapolis Observer thought:
"In the Indianapolis suburbs, officers said they needed a mine-resistant vehicle to protect against a possible attack by veterans returning from war."

Posted by Indianapolis Observer at 12:34 PM No comments: 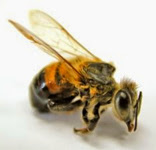 The Indiana Beekeeping School takes place Friday and Saturday (June 13 and 14, 2014) in the Normandy Barn at the Indiana State Fairgrounds in Indianapolis.

The registration fee of $120 includes textbooks, notes and meals on Saturday. Attendees can bring additional family members for $95 each.

Yet Another Reason to be Glad Mourdock Didn't Win

Indiana state treasurer Richard Mourdock, who mounted an unsuccessful bid for U.S. Senate in 2012, says America is going the way of Hitler's Nazi Germany, according to a report in the Huffington Post.

"Mourdock broke down the comparison in detail on Saturday [7 June], the day after the 70th anniversary of D-Day and the Battle of Normandy," writes Igor Bobic.

""The people of Germany in a free election selected the Nazi party because they made great promises that appealed to them because they were desperate and destitute. And why is that? Because Germany was bankrupt," [Mourdock] told a supportive crowd at the Indiana Republican Convention in Fort Wayne...."

This Indianapolis Observer is grateful this clown was not elected to represent us, as (given statements such as that) he certainly does not. Gov. Pence needs to distance himself from such inane comments pronto.

Posted by Indianapolis Observer at 11:01 PM No comments: