The impact of cloud computing and mobile devices will be a key theme of the 2011 CACR Higher Education Cybersecurity Summit set for 11 April at the University Conference Place on the campus of Indiana University-Purdue University Indianapolis.
Posted by Indianapolis Observer at 2:34 PM No comments:

As the New York Times notes, "Butler is the first team from outside one of the six major conferences to reach consecutive Final Fours since Nevada-Las Vegas in 1991. It is the lowest-seeded team to reach the Final Four since No. 11 George Mason in 2006."

Really, now, is there anything else that needs to be said?
Posted by Indianapolis Observer at 3:56 PM No comments:

Jordan Academy of Dance to Close

Inside INdiana Business reports that Butler University has announced that the Jordan Academy of Dance, which has trained young dancers in Indianapolis since 1909, will close on 31 May because it is no longer a sustainable venture.
Posted by Indianapolis Observer at 11:09 PM No comments:

What Were They Thinking?

Has the management of the Indianapolis Motor Speedway lost its mind?

What ever would possess them to invite Donald Trump (who's flirting with a presidential run) to drive the pace car at the Indianapolis "500" -- for its centennial run no less!

"Change is Nature", an exhibit of the works of Minda Douglas, continues through 25 March in Gallery 924, 924 North Pennsylvania Street, Indianapolis.

Douglas' series of mixed-media drawings reflects her interest in the natural world and its innate ability to be fragile and yet resilient. Life can end in the blink of an eye and other times, life persists, changes and evolves over centuries of geological time. The works in this series express the power, balance, and complexity of the natural systems that endure.

Conor Friedersdorf of The Atlantic and Conn Carroll of the Heritage Foundation debate conservative criticism of G.O.P. presidential contender Mitch Daniels here.
Posted by Indianapolis Observer at 6:08 PM No comments:

"Choose Your Own Adventure"

Decisions made today will determine whether Indy will be a "super city" tomorrow. This session of Indy Talks is a theatrical exhibition of current issues affecting our city.

It takes place at 7 p.m. 6 April in Clowes Auditorium of the Central Library, 40 East St. Clair Street, Indianapolis. There is no charge to attend.

The exhibition was created by the Indianapolis-Marion County Public Library, Know No Stranger and Big Car Collective.
Posted by Indianapolis Observer at 3:17 PM No comments:

"The Securities and Exchange Commission also filed a separate complaint against the men in federal court."

Read it all here.
Posted by Indianapolis Observer at 1:20 PM No comments:

Emily Pilloton, an architect, designer, teacher and founder of Project H Design is the featured speaker at the 7 p.m. session of Indy Talks 24 March.

The conversation about sustainable design solutions for Indianapolis will be held in the Tobias Theater of the Indianapolis Museum of Art, 4000 Michigan Road, Indianapolis. Tickets are $8 at the door.

The event, which begins at 10 a.m. with book signings, is sponsored by the Christamore House Guild and benefits the Frances Carter Coburn Scholarship Fund and other educational programs of Christamore House.

Tickets are $85 (and note that the event usually sells out, so if you want to be there, order early). For information, email Jane Kroot.
Posted by Indianapolis Observer at 6:20 PM No comments:

A reception for the opening of a new exhibit at Herron School of Art and Design of Indiana University-Purdue University in Indianapolis will be held from 5 to 8 p.m. today (11 March) in the Eleanor Prest Reese Gallery and the Robert B. Berkshire Gallery at the school, 735 West New York Street, Indianapolis.

"3x3" is a group exhibit bringing together the work of William Dennisuk, Ivana Popov and Daniel Jolliffe. Each artist incorporates light and/or technology into large-scale works.

(Image, courtesy of Herron, is "Hidden Variables" by William Dennisuk)
Posted by Indianapolis Observer at 1:16 AM No comments: 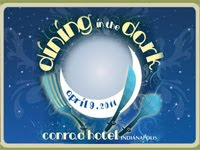 Indy doesn't have one of the trendy no-lights restaurants, but you can try your hand at "dining in the dark" at the upcoming fundraiser for the Bosma Visionary Opportunities Foundation.

It'll be held at 6 p.m. 9 April in the Conrad Hotel, Indianapolis.

First comes cocktails and appetizers -- with the lights on. Then, dinner served in complete darkness. Tickets start at $150.

No surprise: this event benefits an organization that helps individuals who are blind or visually impaired.

Now that Charles White, the newly-elected Indiana Secretary of State, has been indicted for felonies regarding his disregard of Indiana election laws, some in the blogosphere have decided that he should be excused his "mistakes" because Senator Richard G. Lugar hasn't lived in Indiana for years.

Ummmm, Lugar's in Washington, D.C., as Indiana's longest-serving senator. There's provision in the law for that kind of absence.

And, besides: what's that got to do with White's transgressions? He's holding the state office that's supposed to uphold election laws, so he -- of all people -- should know what they are and abide by them.

Regardless of what Lugar (or anyone else) does!

In logic, that's called the fallacy of the red herring, isn't it?
Posted by Indianapolis Observer at 5:41 PM 2 comments: 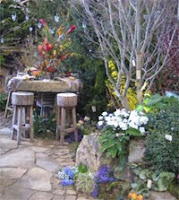 Insider tip: Just 1000 visitors to the show will walk away with their very own “swag bag,” filled with all sorts of goodies. Want one? All you have to do is visit a show information booth inside the West Pavilion and say, “It’s a beautiful day in the neighborhood!” Each day during the nine-day show, the first 100 visitors to voice that phrase will lay claim to a swag bag. Another 100 bags will be distributed at random during the show’s run.

A preview of the show goes to those attending the "Noble Evening in the Garden" gala from 7 to 11 p.m. Friday (11 March). Proceeds benefit Noble of Indiana, which helps children and adults with developmental disabilities like Down syndrome and autism.

Who owns antiquities and other cultural property? A forum to discuss this topic is set for 1:30-3 p.m. 23 March in Lilly Auditorium, University Library, Indiana University-Purdue University in Indianapolis.

IUPUI Museum Studies graduate students will pose questions to Dr. James Cuno, President of the Art Institute of Chicago, and Dr. Maxwell Anderson, CEO of the Indianapolis Museum of Art. Audience members will have the opportunity to ask questions and to join the discussion

If you want to go, sign up with the Center for Teaching and Learning at IUPUI. Although all CTL-sponsored events are free, participants are asked to register online in advance in order to generate nametags and attendance sheets, as well as to ensure that there are sufficient materials and seating available.

(Photo courtesy of IUPUI)
Posted by Indianapolis Observer at 11:42 AM No comments:

This event will be held from 6-10 p.m. in the north gallery of the newly renovated Indy Indie Artist Colony, 26 East 14th Street, Indianapolis.

"First In Line" starts out as an exhibition of original art by local artists and IDADA members. All works are priced at $100 and are sold on a first come, first serve basis.

When art is purchased, a photo is taken of the buyer with the work. This photo is now displayed, and the art leaves with the patron. The exhibit morphs into a documentary snapshot show!

The IDADA is a non-profit membership based organization of studio artists, art galleries, and arts-related businesses within the 20-block square of Monument Circle.
Posted by Indianapolis Observer at 6:59 PM No comments:

According to Inside INdiana Business, Mayor Greg Ballard is seeking public input on a landmark for the Lafayette Square area, which is now known as the International Marketplace. "The city is looking for ideas on an icon, feature or streetscape that residents and visitors would see upon entering the northwest side area."

As Paul K. Ogden reports this morning (when talking about the passage of the NoSo subsidy), City-County Council President Ryan "Vaughn said that in order to keep afloat previous downtown development subsidized by taxpayers, we need to keep pumping more taxpayer dollars in. The law enforcement authorities have a term for that. It is called a Ponzi scheme."
Posted by Indianapolis Observer at 10:10 AM No comments: