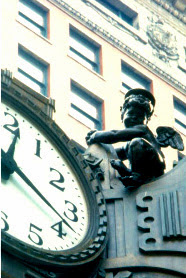 It was 1946. World War II just ended and thousands returned home from military service. Among them, Virginia Holmes--a prize-winning commercial artist--came back to Indianapolis and started her career in the advertising department at L.S. Ayres & Company, then a prominent department store downtown.

When it came time to compose the 1946 holiday catalog, merchandise was still in short supply, so Holmes created whimsical cherubs to fill the somewhat empty pages. The cherubs captured hearts and began an Indianapolis holiday tradition that continues today.

Customer response to the cherubs was so great, Ayres perpetuated their appearance in its 1947 holiday advertising. It was Ayres’ 75th Anniversary, and that called for a special addition to their holiday celebration plans.

Ayres commissioned nationally recognized Indianapolis sculptor and Herron School of Art instructor, David Rubins to create a bronze cherub for the store’s landmark clock, located on the outside of their building on the corner of Washington and Meridian streets.

As the story is told, the whimsical Cherub mysteriously appeared atop the clock on Thanksgiving Eve 1947 to keep a watchful eye on the holiday shoppers until Santa took over on Christmas Eve. In the 66 years since, thousands have had the pleasure of seeing the Cherub perched atop the famous clock each holiday season. This powerful tradition lives in the hearts and minds and memories of a city and its grateful citizens.

The May Department Store Company purchased L.S. Ayres in 1986 and in 1992, moved the Cherub to its headquarters in St. Louis, Missouri.

There was tremendous public outcry when the Cherub did not appear that holiday season. So May donated the Cherub to the City of Indianapolis and in 1994 Indianapolis Downtown, Inc. became the Cherub’s legal guardian.

Posted by Indianapolis Observer at 8:00 AM