Andy Warhol at the IMA 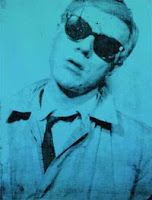 You'd better get a move on if you want to see the exhibit "Andy Warhol Enterprises" at the Indianapolis Museum of Art, 4000 Michigan Road, Indianapolis.

The exhibit examines Warhol’s lifelong exploration of commerce, consumerism, and the business of art making. With artwork ranging from shop window designs and commercial illustrations of the 1950s to his groundbreaking paintings of consumer products and stars of the 1960s, and ultimately to his ventures into television, film and magazines of the 1970s and 1980s, Andy Warhol Enterprises serves as a window into the world of commerce and art, and the ways that Warhol intentionally blurred the lines between the two.

Or as he put it, "Good business is the best art."

The IMA will be open from 11 a.m. to 5 p.m. on 1 January -- a good thing, since the exhibit closes 2 January. Exhibition admission is $14, with children 6 and under admitted free (as are IMA members).