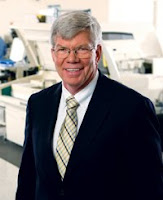 The first new medical school in Indiana in over a century will be named for Michael A. Evans, Marian University announced today. In 2010, Dr. Evans made a gift and pledge of $48 million to Marian to kick off the creation of the school.

Evans (pictured) is a former Army Ranger who overcame lift-threatening injuries suffered in Vietnam to become a noted scientist. In 1990, he founded AIT Laboratories, where he remains president and CEO. Evans has a doctorate in toxicology from the Indiana University School of Medicine, a postdoctoral fellowship with the National Toxicology Center at Vanderbilt University School of Medicine, and numerous fellowships and grants from the National Institute of Health and the World Health Organization.

Marian University will name the new building on campus housing the College of Osteopathic Medicine and the School of Nursing in his honor. The Michael A. Evans Center for Health Sciences, set to open in the fall of 2013, is being designed by Indianapolis architects Schmidt and Associates and BSA LifeStructures.
Posted by Indianapolis Observer at 6:38 PM